1. How many tangents can a circle have?
Answer :
A circle can have infinite tangents.

By Pythagoras theorem in ΔOPQ,

(D) is the correct option.

4. Draw a circle and two lines parallel to a given line such that one is a tangent and the
other, a secant to the circle.
Answer : 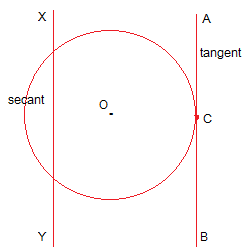 In Q.1 to 3, choose the correct option and give justification.

1.  From a point Q, the length of the tangent to a circle is 24 cm and the distance of Q from the centre is 25 cm. The radius of the circle is

By Pythagoras theorem in ΔOPQ,

The radius of the circle is option (A) 7 cm. 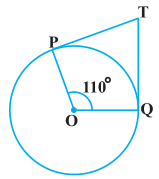 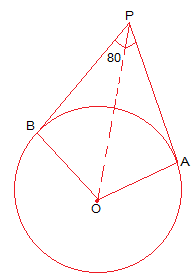 In ΔOPB and ΔOPA,
AP = BP (Tangents from a point are equal)
OA = OB (Radii of the circle)
OP = OP (Common side)
∴ ΔOPB ≅ ΔOPA (by SSS congruence condition)

4.  Prove that the tangents drawn at the ends of a diameter of a circle are parallel.
Answer :
Let AB be a diameter of the circle. Two tangents PQ and RS are drawn at points A and B 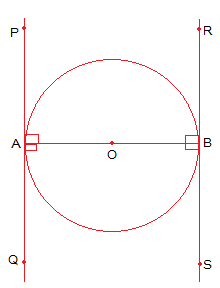 respectively.
Radii of the circle to the tangents will be perpendicular to it.
∴ OB ⊥ RS and,

Hence Proved that the tangents drawn at the ends of a diameter of a circle are parallel.

5.  Prove that the perpendicular at the point of contact to the tangent to a circle passes through the centre.
Answer :

Let AB be the tangent to the circle at point P with centre O.

We have to prove that PQ passes through the point O.

Through O, draw a straight line CD parallel to the tangent AB.

AS, CD // AB PQ is the line of intersection,

Hence, our supposition is wrong.

6.  The length of a tangent from a point A at distance 5 cm from the centre of the circle is 4 cm. Find the radius of the circle.
Answer :
AB is a tangent drawn on this circle from point A.

7. Two concentric circles are of radii 5 cm and 3 cm. Find the length of the chord of the
larger circle which touches the smaller circle.
Answer :

AB be the chord of the larger circle which touches the smaller circle at point P.

∴ AB is tangent to the smaller circle to the point P. 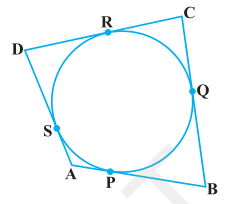 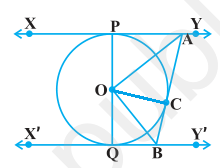 10.  Prove that the angle between the two tangents drawn from an external point to a circle is supplementary to the angle subtended by the line-segment joining the points of contact at the centre.
Answer :

∴ The angle between the two tangents drawn from an external point to a circle is supplementary to the angle subtended by the line-segment joining the points of contact at the centre.

11. Prove that the parallelogram circumscribing a circle is a rhombus.
Answer :

From the figure, we observe that,

12. A triangle ABC is drawn to circumscribe a circle of radius 4 cm such that the segments BD and

DC into which BC is divided by the point of contact D are of lengths 8 cm and 6 cm respectively (see Fig. 10.14). Find the sides AB and AC.
Answer :

Equating equation (i) and (ii) we get,

13.  Prove that opposite sides of a quadrilateral circumscribing a circle subtend supplementary angles at the centre of the circle.
Answer :

Let ABCD be a quadrilateral circumscribing a circle with O such that it touches the circle at point P, Q, R, S. Join the vertices of the quadrilateral ABCD to the center of the circle.
In ΔOAP and ΔOAS,
AP = AS (Tangents from the same point)
OP = OS (Radii of the circle)
OA = OA (Common side)
ΔOAP ≅ ΔOAS (SSS congruence condition)
∴ ∠POA = ∠AOS